Theory and practice: differences between design and testing

July 27th 2022. On a torrid summer afternoon, the Keelcrab R&D team moves to Genoa for the first
day of testing of MaxiCrab; after months of hard work, tests, calculations, prototype design and
simulations, the fateful day of truth has arrived; will it work?

Having acknowledged that all the preliminary test phases in laboratory and in a simulated
environment gave positive results, we know from experience that the difference between testing our
robots in a simulated environment or actually on the hull of a vessel is similar to the difference
between attempting to land a Boeing 737 in DastyFlySim (perhaps one of the leading flight simulators
in Europe) or on the Malpensa runway on a foggy day in December.

First of all, a couple of due clarifications:

MaxiCrab is the new underwater drone for cleaning yacht hulls; it is the evolution of another product,
Keelcrab, the drone for cleaning pleasure boat hulls, already produced and sold by Aeffe srl in more
than 50 countries in the first five years since market launch.
The maxiCrab prototype, built and ready for testing, is a new model of underwater drone with
enlarged dimensions and advanced functions, designed for cleaning yachts long from 24 to 50 m. This
new prototype is therefore characterised first and foremost by greater physicality and relative
cleaning capacity, but also by greater adhesion power to the hull thanks to a dual suction pump
system, new electronic board, additional digital functions to support the operator, and a revised
design following new modelling.

Tech Fast: a financing program proposed by the European Regional Development Fund in Lombardy;
Aeffe S.r.l.’s project was awarded as the best bidder in the region, confirming its desire to bring
Lombardy’s excellence in the mechatronics sector to the world. The MaxiCrab project, ID 3156753,
was 50% co-financed with public funds from the Tech Fast call of the ERDF 2014-2020 in partnership
with the Lombardy Region and the European Union.
Returning to the group heading to Genoa on the day of truth, the debate centred on a commonplace
of mechanics and design according to which “in general terms” a proportional and total reduction of
the physicality of a complex mechanical object generates a far greater design and prototype effort
than its enlargement; in simple terms, in our case a MiniCrab would be far more difficult and sweaty
than a MaxiCrab, or in other words: the mechanical multiplication factors in the enlargement would
be less complex to manage with respect to divisive factors in downsizing a precisely mechanical
complex object.

The doubt is substantial, well-founded and legitimate, and especially when I think of a multiplier of
overall effort on a possible MiniCrab, compared to the huge efforts made to put our first MaxiCrab
in the water, I feel like changing the company’s core-business… but let’s get back to the test: we are
ready on the jetty with MaxiCrab already extracted from its ip67 transport case, the power cable
promptly unrolled on the jetty, electronics box connected to the column and remote control tested
and ready to use. We lower the drone into the water using the Kevlar-reinforced power cable, and
here the first big test: is MaxiCrab‘s hydrostatic trim correct? Our ‘zero’, the gold standard, yardstick
and reference for the validation of the prototype is clearly the-Keelcrab (the ‘starting’ version already
on the market, dedicated to smaller boat hulls). KeelCrab has a neutral-positive hydrostatic buoyancy
(studied and improved over the years) since it is equipped with a calculated and correct quantity of
closed-cell foam material inside some of the drone’s mechanical components, to balance those with
a negative specific weight in immersion and guarantees a correct neutral-positive buoyancy for us;
this is fundamental for the specific activities that the drone actually performs: going straight while
advancing (more generally, obeying commands) without being subject to exogenous thrust vectors
that modify trajectories while it is engaged in cleaning an irregular surface such as a boat hull all at
varying depths.

In the design of MaxiCrab we mainly varied the X-axis (its width) by increasing it by 60% and
generating an overall weight increase out of the water of 35%; so, we started by adding +35% floating
foam (in the handling and frame rollers / as for the keelcrab) applying a simple mathematical
proportion. Result: as soon as it was lowered into the water, our MaxiCrab, instead of proving to be
a neutral-positive object, sank like a submarine, immediately making us realise that reflection was
necessary, a robust correction of the amount of floating foam installed in the mechanical components
and the study of the correct relative application (in order to avoid problems of variation in the centre
of gravity) before proceeding with the engine start-up and hull adhesion tests.

What in the mathematical proportion of hydrostatic trim calculation have we missed? The answer is complex and certainly lies in the concept of specific weight and the difference in the behaviour of a body surfaced or immersed in liquid; the difference is between the simplicity of the theoretical model adopted and the complexity of the real environment. Having become aware of the problem, we began with
changes to the robot’s hydrostatic buoyancy by adding buoyant material, taking great care with the
relative positioning (so as not to vary the barycentre and metacentre of our prototype and thus
anticipating and avoiding buoyancy problems in a state of navigation with suction pumps active)
increasing proportionally by +10% at a time (testing the result step by step every time in immersion)
until reaching the desired hydrostatic buoyancy only on the third attempt. Result = weight of
Maxicrab +35% (compared to the keelcrab) buoyant material added +65%; to compensate for the
hydrostatic buoyancy, more than twice the amount of buoyant material initially assumed was added.

Having thus found an apparently correct hydrostatic set-up, we set about to recalculate the robot in
the water and operate the pump motors in order to test its centre of gravity with active pumps, but above all its overall suction on the hull. In the MaxiCrab version, unlike the basic version the keelcrab, there are 2 suction motors installed:
Even in this case, although we relied on a reasoned mathematical proportion according to which the increase in the flow rate of the pumps must not be double (maxiCrab is not twice as large as the keelcrab) but parameterised this time on the X-axis basis of maxiCrab (i.e. its width), there was no shortage of surprises. Following the above-mentioned criterion, the decrease (in volts) in the electronic management of the single motor led to an overall increase of 70% in the water flow rate of the pumps, compared to the-keelcrab (since it was generated by 2 combined motors). Result: once the pumps were switched on and the drone was positioned just below the waterline of the test yacht, the suction generated was so high that the drone could not be moved by the traction motors. In fact, MaxiCrab was so attached that the traction motors struggled to move the drone on the surface of the hull, as if there was an arm above the hull compressing the drone towards the hull and sending the motors into protection because they were overcurrent. In this case, as in the previous one, there could have been a functional response at a theoretical level, but this was not supported by the actual analysis of the behaviour in hull tests.

Result: 50% reduction in the overall pump flow rate (estimated 30%) compared to the nominal flow rate at 24 volts with a clear advantage in terms of efficiency of the drone’s current consumption function and MaxiCrab in correct suction with traction motors slightly under stress but within the limits of use.

After modifying the firmware and adjusting the power delivered to the pumps, we proceeded to the
start of the planned test session by verifying and filming the prototype both by means of visual
behavioural analysis (especially during the phases in which the drone was working on the waterline)
and by means of display and in ARA trim (with tanks and GAV).
In spite of the brush changes, some additional electronic set-up in the handling of the vertical parts
of the hull, we experimented a slight heating of the traction motors after more than 4 constant hours
of use, problem resolved with the installation of brushless traction motors on the subsequent
prototype version. After that, the test session was very positive overall. MaxiCrab turned out to be
well controllable, not subject to any particular exogenous thrust vectors during navigation, with
excellent cleaning capabilities; suction factor was well balanced, with appealing marketing terms, the
child of the economies and hydrostatic advantages obtained through the use of the combined dual
pump system.
Despite the fact that the day enlightened us on how theory alone is never enough to reach the
effective results, or even before that the product concept, the most comforting element of this
positive test session certainly remains the speed with which the Keelcrab team understood and
promptly solved all the operational problems highlighted during the tests.
This skill for immediate reaction is very strong if compared to the birth of the first the keelcrab for
which it took months and years. This is certainly a fortifying and motivating factor, symptomatic of a
group maturity that over the years, on the basis of the continuous creation of new submarine
mechatronic products, consolidated know-how and experience, a factor that perhaps in the shortterm economic cycle is difficult to highlight but which certainly in the long term is the company’s
primary added value. 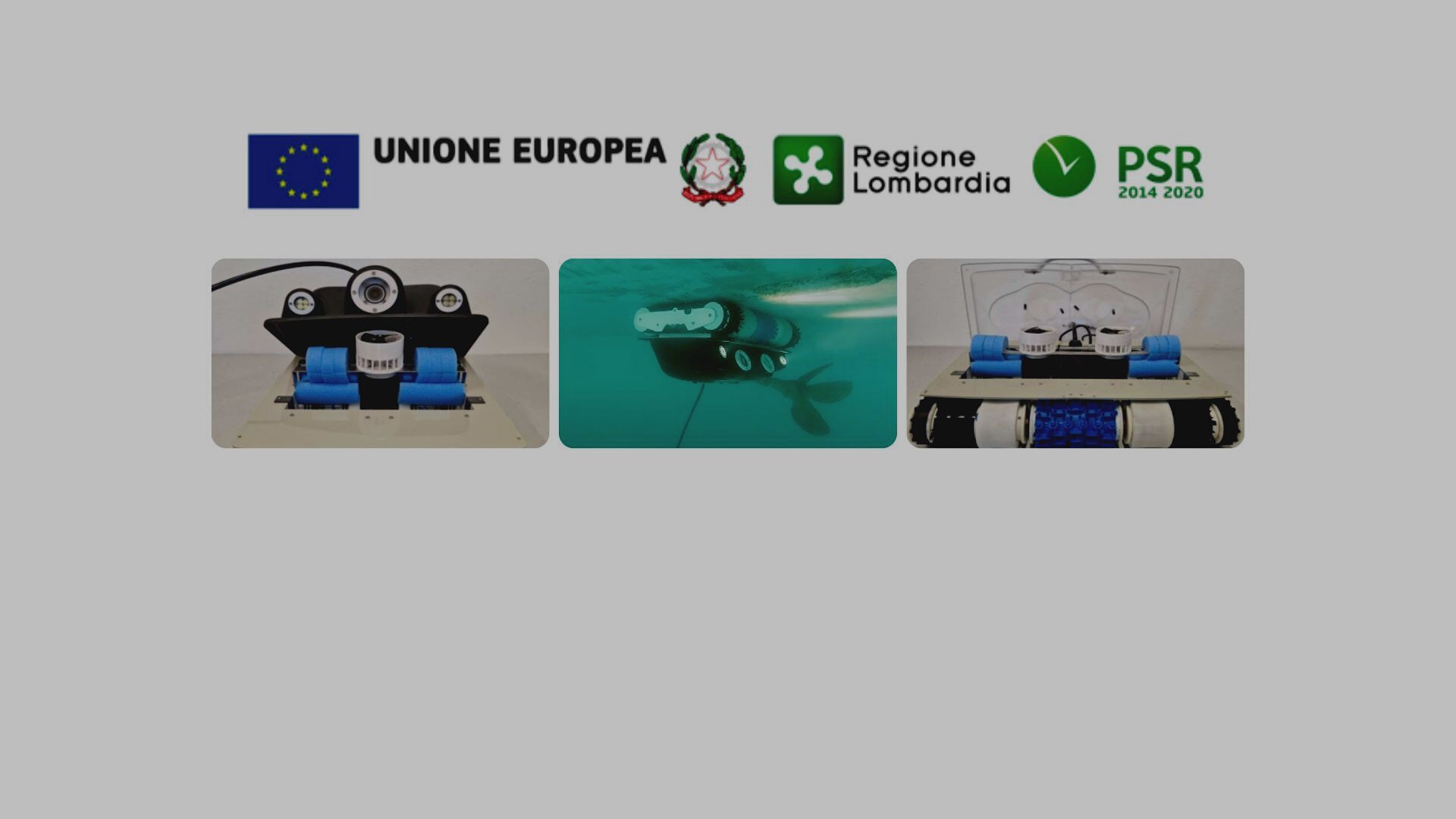